Re-learning the lessons of distraction and over confidence…

My wife and eldest child are out of town; my youngest child is at a sleepover. I decide that this “free” evening is an ideal time to get some things accomplished around the kitchen.

Its 8pm and I decide that while catching up on televised network news, I will also check emails while cooking some meals for the week (following a recipe on the iPad), and prepare myself some dinner.

By means of background, the task I am about to undertake is one for which I am well-trained, and have a plethora experience with, after all it is the simple task of chopping an onion. 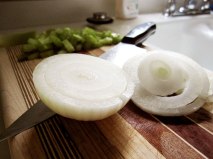 I learned to cook in the kitchen of the Savoy Hotel in London, where I was extensively reminded of the importance of knife safety, and repetitively trained and retrained on the appropriate technique for dicing, slicing and chopping of said onion.

What followed was a relatively calm elevation and compression exercise, while putting away all the dinner and meal ingredients, turning off the TV, laptop and iPad, and then determining what to do…

Over the next twenty-four hours, I heard from my OT, RN and MD friends that this was a reminder of some of the basic tenets of distraction, safety science and human factors. This was, after they cared for my injury, treated me exceptionally well, and suppressed the giggles and smirks of “funny that the guy that talks about reducing distractions and putting error prone humans into safe systems doesn’t seem to heed his own advice…”, a somewhat painful and rather bloody example of to err is human.

The loop was especially well closed by my friend and colleague, David Ring MD at Massachusetts General Hospital (MGH). David is the Chief of the MGH Orthopedic Hand and Upper Extremity Service, someone I have known for several years, and someone whose willingness to talk openly about his own humanness and natural tendency for error has been an inspiration. Check out his mea culpa:

David took a look at my finger within 24-hours of the accident, and recalled the fact that there is a human tendency to take the routine, habitual, oft repeated task, and stop paying attention to the risks associated with it. He shared that when driving long distances his wife will take the wheel; for him driving has become routine and habitual. He, and most likely she too, are aware of the fact that he is not paying attention to the small variations that could ultimately lead to a harm event.

I had undertaken my routine task so many times that I believed I could simultaneously safely perform other tasks at the same time, while taking in the noise of the digital world along with TV images. This over-confidence resulted in a missing fingertip. This over-confidence in healthcare environments can result in care providers putting themselves, and their patients, in unsafe and potentially deadly situations. While still dealing with the discomfort (and embarrassment), I am kind of grateful for the reminder.

Now – how to break this news to my wife…

Stuff That Needs To Be Said

The Holistic Revolution
Tapestry of things...

With great curiosity about almost everything...tossed together like a patchwork quilt...

Im ashamed to die until i have won some victory for humanity.

Domenic Garisto / LIFE IS NOT A REHERSAL,SO LIVE IT..if you can't be the poet, be the poem..havau22.com

Just a small town girl who writes about Christian stuff.

Be suspect of anything encouraging you to surrender your curiosity

A Collection of Blogs Written By Men & Women In Prison